A city shapes us or do we build them up? The character of a city and its citizens are inextricably intertwined just as our fate and destiny. So when a city plays an important role in a book or a movie, it is not surprising. And a city that has shaped and shattered many a dreams, a city that has an underbelly as strong as its 6-pack abs, a city of love and deceit, a city of private helipads and of the “Mumbai local” tracks and above all a city that bounces back each time, a city that has an indefatigable spirit. Yes, Mumbai is a central character in the love story of Babloo and Vandana in Once Upon the Tracks of Mumbai, a debut novel by Rishi Vohra. 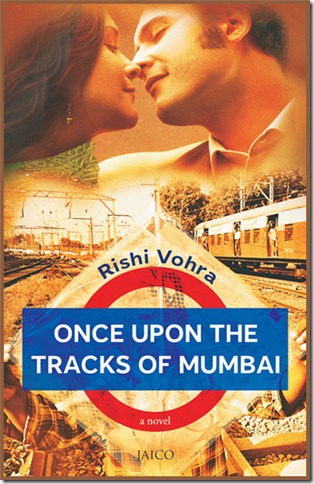 Promising to be a heady treat replete with its shares of twists and turns, romance,action, and a surprise ending the story has echoes of a Bollywood masala flick. Infact don’t be surprised if very soon Rishi gets hounded by producers and directors alike. He has had a successful stint in the Entertainment industry and knows the pulse of his audience well.

Rightly said you can take a man out of Mumbai but you cannot take Mumbai out of a man, sure rings true for Rishi. The city has left an indelible mark on the psyche of Rishi, and he keeps coming back to its fold time and again. Rishi Vohra again recently relocated back to Mumbai after completing a Green MBA from San Francisco State University and a Masters Diploma in Environmental Law.

Lets hear it from the man himself as to what drives and motivates him and what is it that he finds so intriguing about the city. Excerpts from an Exclusive Interview:

1. Congrats Rishi, tell us how do you feel now that you’re getting published?

Thanks Anubha! It feels great!

People usually dream of getting published. But my dream was just to write a novel. I wrote this book in 2006, in Berkeley, California. At the time, I didn’t even think of pushing this book for publication. It was just a story that I wanted to tell and put on paper. I had been writing a lot before that – newspaper columns, articles, scripts etc. And I have always been reading a lot. But this was quite a different experience, and required a lot of time and hard work. I feel like I have accomplished something since this is the first novel I wrote and people are waiting to read it. Jaico is more excited about the book than I am, which really boosts my confidence.

2. So what has been your driving force?

My driving force to write – I don’t know. It is something that comes effortless to me. I love visualizing, listening, writing stories. Working in the TV and film industry helped me explore my creative side. I feel that writing is just another medium to express oneself.

My driving force to getting published is the amount of rejections I got for my manuscript. See Anubha, when I wrote this book in 2006 I was in the San Francisco area, it was 500 pages. I pushed it for publication in the US and Europe, and got rejection letters from all the literary agents and publishing companies I wrote to. I think I must have collected a stack of close to 150 rejection letters! I reached a point where I wanted to know what was wrong with my book. I asked one literary agent, the last rejection letter I received, for her honest feedback. Coincidently, she was familiar with India and the emerging popularity of mass fiction here. She explained to me that my book wasn’t written with Western sensibilities, which is essential for a Western audience. She had read Indian mass fiction and saw a potential for this book in that market. Among other things, she advised me to rewrite the book in very simple English keeping the masses in mind, and then push the book for publication in India. On her advice, I rewrote the entire book in 2011, cutting the length down to half (to roughly 250 pages) and pushed it for publication. Had I not got so many rejection letters over the years, I wouldn’t have thought of getting it published. Of course, I had also given the book to a few close friends and family and they loved the book. They also told me that I had a unique book in hand that I should look at getting published, but it’s the rejection letters that propelled me.

4. What is it about Mumbai that inspires you so much, I mean the city plays such an important role in this novel. It isn’t like this could have been set anywhere.

This particular book could only be set in Mumbai because it revolves around the Mumbai railway tracks, local trains, and other unique aspects of the city.

The fascinating part of this city is that every street has a history to it. There’s a story around every corner. This is one city where every third person has come from some other place in search of better opportunities, and his or her struggle is unique in its own way.

Mumbai is where I grew up. So it’s the city I call home and have a strong connection with. The city inspires everyone who comes here, that’s why they rarely go back. It welcomes you, gives you a home, a profession, and a sense of belonging. I grew up here, so my connect with the city is even stronger.

It’s like the way you feel about Delhi, Anubha. There’s a certain sense of emotional security that a place gives you.

5. Who is your favorite Indian author?

My favourite Indian author is Vikram Chandra. I happened to meet him in Berkeley in 2008, at his book reading for Sacred Games. It was nice talking to him and I felt fortunate that I got to put a face to the name. How many people actually get to meet their favourite authors?

6. A novel that starts with “Once Upon…” will it have a “happily ever after…” Does your story too has a fairy tale kind of flavor.

Anubha, I believe in happy endings. Everyone in life should get what they want. And if you want something from your heart and for the right reasons, it has to come to you.

The main character, Babloo, has psychological disorders. That makes him devoid of logic and a sense of reasoning, typical of normal adults. He is made fun of, neglected, and feels a sense of loneliness and hopelessness in his life. This book is not a fairy tale, but a drama. And in dramas, anything can happen – be it good or bad!

7. What’s your advice for my fellow bloggers who dream of getting published one day?

Keep writing! Getting published is very difficult, but not impossible. And it’s not just a dream, but requires a huge effort from the writer’s side. You may get rejection letters, but if you have a good book, you will definitely find a publisher. You just have to keep trying.

In India, nonfiction sells more than fiction. So if you’re writing nonfiction, you need to be somewhat of an expert on the subject (proven through your credentials) and you shouldn’t have a problem in finding a publisher.

There are a lot of fiction writers out there. And just because you’re a good writer, doesn’t necessarily make you a good story-teller. So write a fiction, only when you have a story to tell. That will make it much easier and make you more appealing as a writer. Of course, don’t hide your book as the next ‘masterpiece’ and let it collect dust on the shelf! Share it with close ones who you can trust with honest feedback. These are the people who are going to buy your book so their opinions matter! The criticism might hurt in the beginning, but it will steer you in the write direction!

Thank you so much Rishi, On behalf of Random Musings I wish you well, and yes don’t forget to sign my copy.

Once Upon the Tracks of Mumbai is published by Jaico and will soon hit the stands in September.

Musings
Life & Relationship Coach. Potter. Writer Explore. Dream. Discover. That is the mantra you see.And this is my space for all those experiential Random Musings.